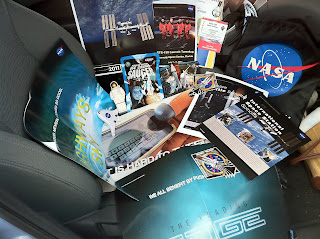 Today was the first day we were allowed to pick up our NASA Tweetup credentials so that is what I went to do right away in the morning. I got a schwag bag full of all kinds of NASA goodies including posters, toys, freeze dried ice cream, and STS-135 patch, pin, and sticker. (You can see more of it here on my Flickr account.)

I also got a free two-day admission to the Kennedy Space Center (KSC.) Our next stop was the KSC visitor complex  to get Scott and my two sons admission tickets so we could spend the day there. We watched the IMAX Space Station 3-D movie (which we’d seen before) and the IMAX 3-D Hubble movie (which we've been wanting to see for a long time now.) The Hubble movie had amazing imagery and featured an astronaut, Mike Massimino, who is a scheduled speaker tomorrow, July 7 at the NASA Tweetup!

We shopped at the gift shop where I bought way too much stuff--since I’d already ordered stuff online from home before the trip too-- including more shirts, hats, and a really cool pair of shuttle earrings. After viewing a few other exhibits, we then caught a bus to go out to the observation area near the shuttle which as close as regular visitors to KSC can get to see it on the launch pad. 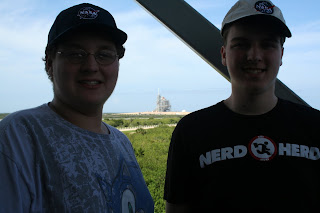 Here is a photo of my sons, Matt and Ethan, with shuttle Atlantis in the background behind them in the distance. 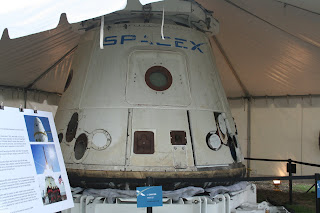 We then made our way out to Cape Canaveral to see the SpaceX Dragon Spaceship on display. SpaceX has former astronauts working there in cooperation with NASA's commercial space division. They are working on private spaceships that might just be the future of American spaceflight.

You can view more of my photos from this day: