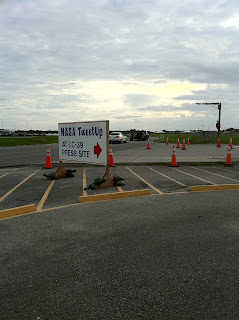 The first day of the NASA Tweetup started very early, before sunrise. I had arranged to carpool with two other space tweeps (Nicole from Canada and Jeremy from Twitter) who were staying at hotels in Titusville near where I was staying too. The driver, Nicole, experienced an unexpected delay. She still needed to get her badge, but when she showed up at 5 a.m. for her to get it...they did not have her information. Without it she would not be able to drive us to the Vehicle Assembly Building (VAB) parking lot near the press area and tweetup tent. Luckily while there we ran into a super nice and helpful Englishman, David Julyan (a film composer), who was also attending the NASA Tweetup. He offered to give Jeremy and I a ride. [It took Nicole several hours, but fortunately she got things straightened out to attend.] 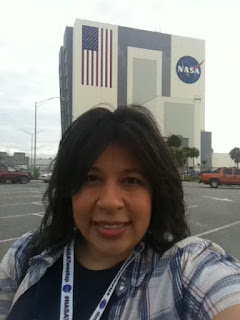 We arrived at the Vehicle Assembly Building parking lot and on the walk over I snapped this picture of me with VAB in the background. The VAB is huge! It houses the space shuttles between launches. The american flag painted on it is enormous. To attempt to grasp the large scale of the building, just the blue star field area of the flag is the size of a regulation basketball court!

The sky was very gray that morning and a few rain drops were already falling on us during the walk to the press area and the tweetup tent. The rain would only get worse as the day progressed. On the walk over I started meeting other participants including Shannon who, although not a NASA employee, is the defacto den mother of these tweetups.


We also got introductions from many of the wonderful NASA people making this event possible like @schierholz @yembrick @bethbeck @jtowns. I had met Stephanie Schierholz in person yesterday when getting my badge. She has done a lot of amazing hard word to get NASA to embrace social media and hold these tweetup events. Beth Beck came over to the table I was seated at along with Jeremy, @pillownaut, @s_boots, and @aewrght.) Beth is working on the wonderful Fragile Oasis website (http://www.fragileoasis.org/)  with @Astro_Ron Garan who is currently onboard the International Sapce Station. Weeks early before even applying for this tweetup I actually follwed a live tweetup given by Ron on Twitter from the ISS, and I had found out then about some of the exciting work and positive changes that Fragile Oasis wants to bring to our planet. Lori Garver, the Deputy Administrator of NASA kicked off the event (her picture at leftt) and Bill Gerstenmaier, associate administrator for Space Operations Mission Directorate, NASA Headquarters (his picture at right) also spoke to us.

Here is the schedule for the Thursday events (even though things got pretty off schedule after the the Elmo and astronauts presentation because we were having a severe thunderstorm with lightening, and we were not allowed to leave the tent for over an hour.)
Thursday, July 7/L-1: Tweetup Day 1
Here are some photos from the morning:


I have about an hour of video with Mike Massimino, Doug Wheelock, and Elmo that I've uploaded to YouTube in multiple parts: Part 1, Part 2, Part 3, and Part 4. NASA was also airing this live on ustream, and their recording of it is available here: http://www.ustream.tv/recorded/15849221/highlight/185193. Doug stayed with us throughout the day and had so many amazing stories to tell us.

It was still very hot, muggy, sticky, and raining outside, but after the torrential rain and severe lightening storm had passed we were able to go eat lunch. Joining me at my table for lunch were Jason Snell (Editorial Director of Macworld) and Teresa Isaac (a former mayor.) One of the incredibly cool things about this event were all of the interesting and successful people from all different professions and walks of life that I was getting to meet and talk with during the tweetup.

Because of the terrible whether we weren't sure that we would get to see the Rotating Service Structure (RSS) retraction that would revel the shuttle Atlantis. Fortunately there was a break in the rain, and we were able to head out to see Atlantis on the launch pad!


After getting to see Atlantis up close, we got back on the buses to go tour the inside the VAB. Being able to go inside the VAB is something very special since only NASA employees typically get access and not even reporters are often not allowed such access. Since the building is so large, I have posted a video here that tries to give a glimpse of the vastness of it.


This day had so many amazing moments and went by so quickly, I cannot possibly capture it all in this one post. I called this post the best of times and worst of times because there were so many wonderful experiences and events (the best of times) however I looked terrible from being rained on all day. It was hot and I was very sweaty so every picture of me looks really awful (the worst of times.) I have lovely "swamp hair" in every photo to immortalize such an amazing time in my life. Yet, I wouldn't trade anything that happened during the day, and it was an amazing day that I will never forget.

We left KSC this day not knowing whether the launch will scrub or delay on July 8. We've been told that if Atlantis starts fueling at 2 a.m. then we should expect them to try to launch on Friday. We are allowed back at the press area as early as 5 a.m. And with traffic expected to be terrible with a million people trying to watch the launch we'll be leaving very early to drive back. I'll be getting up very early again if they start to fuel Atlantis at 2 a.m.. No (or very little) sleep until launch, I guess.