Wins and Losses - A Year in Review

I've been quiet on this blog during this last year, but it wasn't for lack of things happening in my life.  If you follow me on Twitter or Facebook, you've already seen some of the highlights. Some of the events that happened last year were fun and inspiring. However, one event was a such a painful loss that it has taken me a full year to decide how to even express my feelings about it in such a public place.

Last year there were literal wins like when I was picked to attend a taping of the Conan O'Brien show when they visited Chicago in June 2012 (see teamcoco.com/chicago for more.) I was selected for the June 11 taping which had Jack McBrayer as a guest. I'd always wanted to see a taping of Conan, and it was a great time. I'm glad I was able to share it with my husband. We spent the weekend at The Wit hotel, and we also did some fun tourist things like eat Chicago style pizza, visit the Cloud Gate at Millennium Park, and take a sunset cruise on the river and lake. 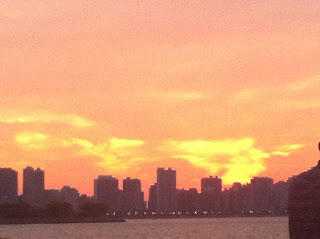 I didn't attend any other NASA events in 2012, but I am always keeping up with NASA. Even while I was on a trip in the Bahamas with my husband and kids, I was keeping tabs on the Curiosity rover as it was landing on Mars. The trip to Nassau, Bahamas was my first time outside of the country. I had wanted to use my passport to travel outside the U.S. (and not just Canada) before I turned 40. And I did! One of these days I'll have to write up a separate post on all the adventures we had in the Bahamas or as my kids called it, Booney Island.

Then at the end of August, I turned 40. A pretty big year with just those things. However, in March of last year, I thought even bigger and better changes were awaiting us in 2012. I was wrong.

Immediately after my husband and I came back from our NASA trip to the Glenn Research Center in Cleveland, I found out I was pregnant. We were excited, nervous, but mostly happy. I have two sons from my previous marriage. My husband doesn't have any children of his own. This would have been his first, our first together. Neither of us were getting any younger, so we were thrilled that we had conceived so quickly. My due date was calculated to be November 11, our first wedding anniversary.

Then at 7, almost 8 weeks, I started to have what the ER diagnosed as a threatened miscarriage. I had never experienced complications with my previous two pregnancies. And even though I knew a miscarriage was always a possibility, nothing could have ever prepared me for the emotional depths of such distressing news. We got an ultrasound of our "little bean" still hanging on...It is all we have from the life that wasn't meant to join our family.

What seemed like endless doctor visits and blood draws, came to an abrupt end on April 4, 2012. A year ago, I was rushed into emergency surgery for a suspected ectopic pregnancy. At the time, I was 8 weeks, almost 9 weeks, pregnant. Time enough for me, my husband, and a few close family members to have formed dreams, plans, and love for a new person we would never get to meet or bring home to join our family. I was also told by the doctors that they would likely have to remove at least one of my ovaries.

Only because I had such wonderful doctors am I able to say I still have both of my ovaries. An analysis of the contents from my D&C confirmed the pregnancy had been only vaginal. I was just experiencing a miscarriage and not an ectopic pregnancy. The doctor could have taken my ovaries to be safe, but he went the extra steps to save them. He sent blue dye into both of my ovaries and realized that their suspected ectopic pregnancy wasn't there at all. For that, I am very thankful. Even though recovering from the surgery was physically exhausting and emotionally challenging, I still had my ovaries...just in case.

It has been a year now. The emotions aren't nearly as raw, but the pain of the loss is still very much there. When I see pictures of babies on Facebook from all my friends who had babies last year and this year, sometimes the tears still flow. We haven't tried again. We aren't sure if we will. Perhaps our time has passed, and we waited too long to try.

I am blessed to have two beautiful sons, a loving and devoted husband, and our doggie fur-kid, Ray. I'm not sure what the future holds for us, but I am thankful to have them in my life.

In a way, it feels like things have come full circle this last year. On March 19, 2013 my husband and I both got to attend a NASA Social to Go Behind the Scenes of the International Space Station in Houston, Texas at the Johnson Space Center. I will definitely have a new blog post soon about that wonderful adventure!

I may also start using this blog to discuss my adventures in fiction writing. One reason I'm blogging less is because I've been focused more on writing for my novel. I am planning to attend the Midwest Writers Workshop this summer, and maybe one day soon I'll have another win when I'm a published novelist :)